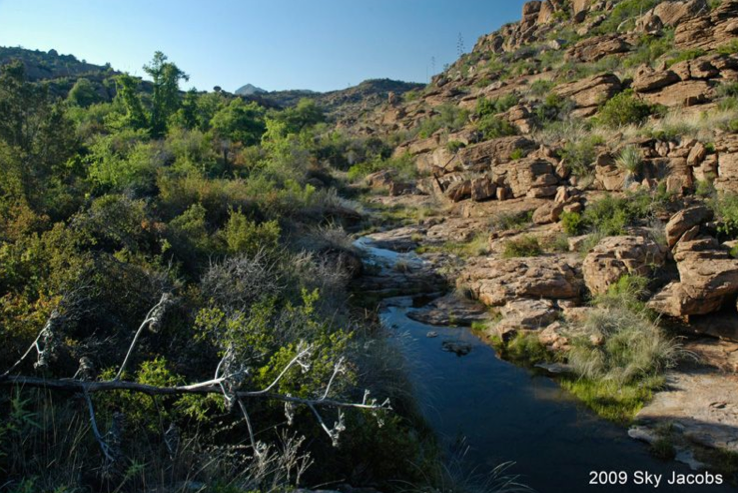 Devil’s Canyon is located in Pinal County Arizona approximately 6 km east of the town of Superior in the Globe Ranger District of the Tonto National Forest. The area is generally rugged with deep canyons and is defined by its complex rock formations. Portions of Devil’s Canyon have stretches of large and dense riparian growth that support a high diversity of breeding birds and other wildlife.

The following story ran in the January 8, 2010 edition of the Nogales International.  The report referenced in the story was written for the mining company and points out what opponents have been saying all along:  This is the wrong place for a mine.  it’s hard to even imagine what the Santa Rita’s would look like with the water table more than 2,000 feet lower than it is now!

A study of flow impacts from water drainage at a proposed open-pit mine in the Santa Rita Mountains predicts the formation of an 819-foot “pit lake” 100 years after the mining is completed.

According to the study commissioned by the Augusta Resource Rosemont Mine, groundwater at the bottom of the pit will have dropped 2,020 feet below current modeled groundwater levels at that site.

Open-pit miners and underground mines pump water constantly when operating so that folding does not hinder operations once a pit is below groundwater levels.

Please read the press statement released by the San Carlos Apache Tribe on the mark -up of S 409 on Wendsday, December 16th, 2009.

Well folks, it’s official.  The Senate Energy & Natural Resources Committee would rather give another handout to a foreign mining consortium worth $300 Billion than to protecting the religious freedom or the natural treasures of this country.

Today, by a voice vote and without debate The Committee passed S 409 as amended along with 31 other bills despite knowing that the compromise between Senator Bingaman and Senator McCain did not pass muster from taxpayers, Native Americans, climbers, or conservationists.  To get the job done Senator Bingaman and Senator McCain resorted to backroom horse-trading and maneuvers instead of doing the people’s business in the light of day.

Please contact your Senators on the Committee and express your disappointment and stay tuned for ways you can help stop this government handout on the Senate floor and in the House.

There will be campaign corks popping in the corporate headquarters of Rio Tinto in London and BHP in Australia, but to put things in perspective, these mining giants have had an army of paid lobbyists and PR hacks working this legislation since 2004 and this is the first time they’ve gotten a bill out of committee.  Who says the average Joe or Jane can’t make a difference?

The following statement was released by Congressman Grijalva today on human rights violations by Rio Tinto and the Oak Flat land exchange.

The bill grants Resolution Copper, a subsidiary of Rio Tinto and BHP Billiton,a lucrative land swap in central Arizona that would give the company mining rights it values at approximately $140 billion over the mine’s projected life span. The company would receive the title to land previously removed from mining activities by President Eisenhower’s administration.

According to the US EPA, Arizona mines are once again Arizona’s biggest polluters.  Each year, the EPA releases it’s Toxic Release Inventory (TRI) data for each state.  This inventory, required by law since 1987, tallies pollution released into our air, water, and ground.  These releases are not verified independently and come form the companies themselves, so the figures are probably conservative.

For 2008, 7 out of the top 10 polluters in Arizona are mines.  The report shows that toxic release in Arizona increased by 7% in 2008 while the national average dropped 6%.  The Arizona figures do not include billions of pounds of tailings that Congress exempted from the reporting requirements. 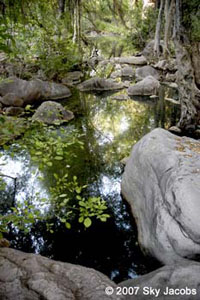 Wednesday, June 17th, the Senate Energy and Natural Resources Committee will be holding a hearing on S. 409, a piece of special interest legislation that would mandate and land exchange that would solely benefit Rio Tinto and BHP-Billiton – two of the largest foreign mining companies in the world.  The bill has been introduced by Arizona Senators McCain and Kyl.

The bill would short circuit the usual and customary process all mining companies go through to get mining permits in the US.  Instead, the bill would allow the companies to get a free pass from these federal laws and to mine in the most destructive way possible, a copper ore body below Oak Flat Campground.

In January, House Natural Resources Committee Chairman Nick Rahall (D-WV) introduced the Hardrock Mining and Reclamation Act of 2009, HR 699. The bill is the same bill that passed the House of Representatives on November 1, 2007. 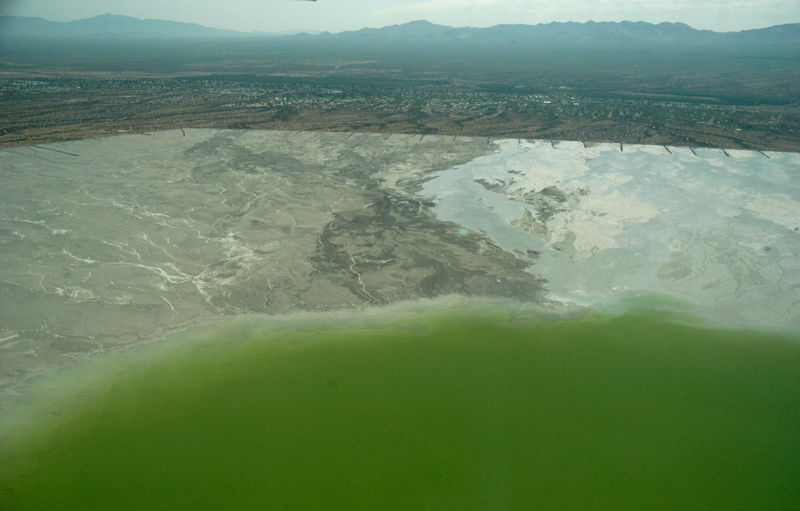 This bill would be a huge help not only to our environmental and our communities, but would help our western economy as well. View a fact sheet about this bill prepared by EARTHWORKS, one of our Coalition member groups. The Arizona Mining Reform Coalition supports the passage of this bill.

On April 2, S. 796, the Hardrock Mining and Reclamation Act of 2009, was introduced in the US Senate by Senator Bingaman (D-NM). This bill does not go nearly as far to protect our public lands as the House version and the Coalition, while recognizing that the bill is a huge improvement does not support the bill. View the Coalition’s fact sheet on S. 796.

A hearing on S 796 and S 140 (View the Coalition’s fact sheet on S. 140), a mine reclamation bill intoduced by Senator Diane Feinstein (D-CA) was held on July 14 in front of the Senate Energy & Natural Resources Committee. View the written testimony submitted by the Arizona Mining Reform Coalition for the hearing record.

No Action on No Action

The Coronado National Forest announced recently that they will not consider a “no action” alternative in writing the Draft Environmental Impact Statement for the Rosemont mine. The draft, expected out late this year, should include a robust no action alternative that lays out clearly the current status quo in the Santa Rita mountains and what would be lost if a mine were approved.

Congresswoman Giffords and Congressman Grijalva, our southern Arizona Congressional Representatives, have written a letter to the Forest Service expressing their dismay for this decision and urging the Coronado National Forest to reconsider. View a copy of the letter.